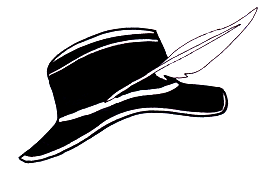 Welcome to the Smithy 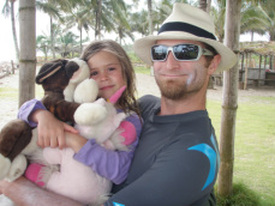 Steve Morley (pictured here with daughter Maisy)
Steve, the maker of "Morley's Forged Knives," has had an interest in handmade knives since he was a teenager; but he didn't get involved in this art until his son, Finn, got him into it in 2010 (see story below).
​
Steve is a member of the American Bladesmith Society, and he is appreciative of all the help he has received from various bladesmiths through the ABS forum, classes, and direct communication in person and through email. 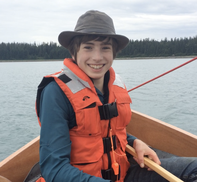 Finn Morley
Finn, the founder of "Finn's Forge", has been smithing since age seven. He has an uncanny ability to stay focused for long periods of time. In fact, when he first started working with steel in Nicaragua, he would happily spend 2-4 hours hammering away in the sweltering heat.
​
Finn is into designing, building, and working hard.
​
​
​ 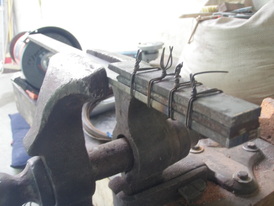 Steve, Finn, and Maisy are originally from Juneau, Alaska, but they got into bladesmithing while living in Nicaragua.  Finn had been interested in swords and daggers since reading The Deltora Quest series, so his family had been on the lookout, unsuccessfully, for metalworking opportunities for years.

They met Mike Diebert (now a Journeyman Smith with the ABS) by chance in a hospital in Managua--Finn had just had a pretty bad bike accident and Mike was bringing his son in for a check up. After learning that Mike taught smithing to local folks, Steve asked if he had a student who might be interested in teaching Finn how to smith.  Mike set them up with one of his students, Jaime; soon Steve and Finn were attending weekly lessons with Jaime, who turned out to be a very patient and knowledgeable teacher.
​

Maisy has been making jewelry since taking a class back in 2018.